The India Pale Ale - or IPA for short - is certainly the epitome of the modern craft beer. Hardly any other beer style represents the movement in a similar way. Especially the fruity aromas of... read more »
Close window
IPA

The India Pale Ale - or IPA for short - is certainly the epitome of the modern craft beer. Hardly any other beer style represents the movement in a similar way. Especially the fruity aromas of the different hops and the higher bitterness are style-defining. Nevertheless, there are many sub-categories of this beer style, which can be extremely different.

What is an IPA / India Pale Ale?

Nowadays there is hardly a modern, youthful craft beer brewery that does not have an IPA in its beer portfolio. Over the years, this beer style has become the most important and popular style of the Beernerds and also the perfect beginner's style. Especially the higher bitterness in contrast to a usual Pilsner for example, and the great and surprising hop aromas make the heart of a beer lover immediately beat faster and ask for more IPA. The big brother of Pale Ale was developed in England at the end of the 18th century so that the beer would survive the long crossing to the British Indian colonies and remain edible. Accordingly, the beer was brewed more strongly so that it had a slightly higher alcohol content than a Pale Ale, but more hops were also used, as hops have a preservative property. This beer was so well received by the colonialists that it quickly became a popular thirst quencher.

Especially the American Craft Beer movement rediscovered this old style from England and made it big again. However, they used their own hops, mainly from the Northwest of the USA, which, in contrast to British hops, is much more fruity. This may have aromas of citrus, tropical fruit or pine, while the English hops taste more like a variety of herbs, tea or grass.

Over the past few years, new sub-styles of India Pale Ale have gradually been developed. From the lighter version Session IPA with less alcohol to the stronger versions Double IPA or Imperial IPA to Triple India Pale Ale. The latter in particular has recently developed into an incredibly popular beer style.

Other new developments from IPA are Milkshake IPA or Sour IPA, which use lactose, fruit and, if desired, lactic acid bacteria in the brewing process. Very popular with beer lovers is the New England IPA, which resembles more a fruit juice in appearance and smell. The bitterness is reduced in a NEIPA, as it is often abbreviated, but still more hops are used than in a conventional IPA. By adding the hops in the cold zone, i.e. not during the boiling process, but after the end of the brewing process in the fermentation tank. This is called cold hoping, dry-hopping or hop plugging. In this way, it is not the ingredients that are responsible for bitterness, but only the components that are important for the aroma that are added to the beer.

Some like and love a NEIPA, others prefer the old-school West Coast IPA, such as the Craft Beer Brewery par excellence, Sierra Nevada from the USA. But also in Europe and Germany there are breweries that have specialized in the beer style IPA. In Germany, Sudden Death or Blech.Brut are certainly among them. In Europe it is Verdant or Deya from England or Stigbergets from Sweden. 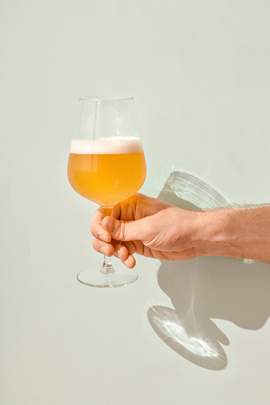 A huge selection of highly rated IPA at Beyond Beer

At Beyond Beer you get the biggest and best selection of IPA in all categories in Germany and Europe. Our range of IPA has the best ratings at Untappd and our assortment is constantly changing so that you always have the newest and freshest India Pale Ales in your fridge. Because that is important. As hops are a sensitive plant, a beer with lots of hops should always be drunk fresh and stored in a dark and cool place.

WENIGER
Filter
Close filters
1 From 3
No results were found for the filter!
NEW

Sudden Death Back In The Day, It Was The Shit...

Salikatt Snug as a Bug in a Rug

CRAK Plain Of The Po