For a few years now, everyone in the craft beer scene has been talking about New England IPAs. These have their roots on the U.S. East Coast and are characterized by their cloudiness... read more »
Close window
New England IPA

For a few years now, everyone in the craft beer scene has been talking about New England IPAs. These have their roots on the U.S. East Coast and are characterized by their cloudiness (hazyness) and extreme hoppy fruitiness. Responsible for this, in addition to huge amounts of dry-hopped hops, are the New England yeasts used. Compared to a classic IPA, NEIPAs are not that malty, more hopped, fruitier and less bitter.

The Haze Craze: The short history of the NEIPA

A New England IPA is one of the most recent inventions in the craft beer world. It was developed by a brewery from the eastern United States: The Alchemist from Vermont. This brewery is particularly known for the Heady Topper, which led to an absolute hype in the scene in the early 2010s. The beer was massively stuffed with hops, resulting in extreme hoppiness and the most blatant flavors you couldn't taste in any other beer in the world at the time. Founder John Kimmich focused solely on this beer for years, refining it to perfection. His proprietary yeast, created over time, is now known in slight variation as "Vermont Yeast".

The differences between American IPA and New England IPA

NEIPA, as it is abbreviated among nerds, differs from a regular American IPA or West Coast IPA, particularly in mouthfeel and intensity. In the beer recipe, you'll find a higher percentage of wheat malt, which leaves more protein in the beer than barley malt. It's familiar from a Hefeweizen, which also has a high wheat content. Visually, this is evident by the concise cloudiness. Oats and oat malt can also be used in larger quantities in a NEIPA. Both wheat and oats give the beer a certain creaminess and softness on the tongue.

The yeast is also different than that used in a regular IPA. It is derived from the aforementioned Vermont yeast and barely clarifies the finished beer despite storage. That's why it's often referred to as a "Hazy IPA."

The most noticeable difference, however, is the hop addition. A NEIPA is brewed with a multiple amount of hops. And for the most part, the hops used tend to be added after the wort boil. Optimally, though, in the form of dry hopping in the fermentation or lagering tank. And the cold hopping is done not just once, but at least twice. This is then referred to as double dry-hopping (DDH). The shape of the hops is also different than usual. Cryo Hops, Lupulin Powder or T90 are the special processing forms of hops, which are particularly suitable for the delivery of aromatics, because they are highly concentrated and the important lupulin is optimally bound.

Here is an overview of the differences with other IPAs:

How does a NEIPA taste?

A New England IPA hardly makes you think of it as a beer. The haziness and intense aromatics are extremely different from the beer you know. Together with the soft body, one thinks more of a fruit juice than of craft beer. There are no typical hop varieties in a NEIPA, however, the European classic varieties are not used as much as American hops or even hops from New Zealand. These varieties have more blatant fruit characteristics of tropical fruit, citrus, grape, apricot, peach or coconut.

We've got some really funky New England IPAs from Germany, Europe and the USA. Pretty much every brewery has at least one NEIPA on tap. Some breweries only brew New England IPAs. Let us inspire you and experience how incredible a NEIPA can taste.

WENIGER
Filter
Close filters
1 From 2
No results were found for the filter!
NEW

Deya You Got It!

Protokoll What Do You Recommend?

Moersleutel Could You Pass Me The Coaxial...

Other Half DDH Green City

Other Half DDH Ain’t Nothing Nice 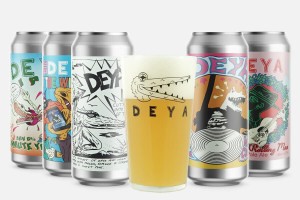 Thin Man Do A Barrel Roll